Accustomed to an online scenario governed by real-time strategy games where micro-management timing is decisive, it is always good to see games like Tactical Monsters. The title of Camex Games ( Heroes Tactics ) features traditional turn-based combat against other people. Lovers of this genre are at a good time with this new title of competitive strategy. 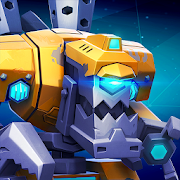 The gameplay system on which Tactical Monsters holds up for sure is attractive: we have to wipe out all enemy units before they do away with ours. This generic phrase means a lot because of the fact that here we have no basis to defend as in many similar games, everything is based on the management of our team. The different units launched in the scenario will get their turn depending on the initiative of each of them and when it is our turn we can do two actions: move or attack. If we do not know what to do, we can always wait with this specific unit so that the next turn can do both. So, if it is not deleted earlier.

Tactical Monsters stands out quickly by translating very well this typical genre of hours and more hours to the terrain of mobile devices. Fights are fast, between 3 and 5 minutes, due to the fact that the scene being divided into hexagons is not very large and the units are killed in few strokes . Here is a good part of the grace of the work, since Tactical Monsters has more than 60 monsters to recruit that we can combine in our team as we want. It’s complicated, not to say impossible, to face the same team on more than one occasion. In this case, try to assemble balanced teams, since each unit is a multitude of possibilities … and the ability to increase when level up.

Tactical Monster is an excellent turn-based PvP that we can not miss. It might give a sense of déja vu because we’ve seen games of the same type, but the time on each of its points converts it into a work that stands out from the rest. The campaign mode is a bit tacky, but let’s invest a lot of time in your magnificent multiplayer competitive.