A lot of people wondered what the “mobile clones” of PUBG and Fortnite would look like after the official games reached the Android and iOS platforms. Some people even claimed that they were games that were “born dead”. They could not be more deceived!

In fact, the arrival of the “officials” has boosted the download and demand for similar games. The so-called “similar games” or “inspired” in PUBG and Fortnite are among the most downloaded.

In February, Free Fire, the lightest game of its kind, was downloaded no less than 12 million times. An impressive number. To get an idea, Modern Combat Versus was downloaded only 40,000 times that same month. This is only on Android.

Soft Launch from Fortnite leveraged looking for other games 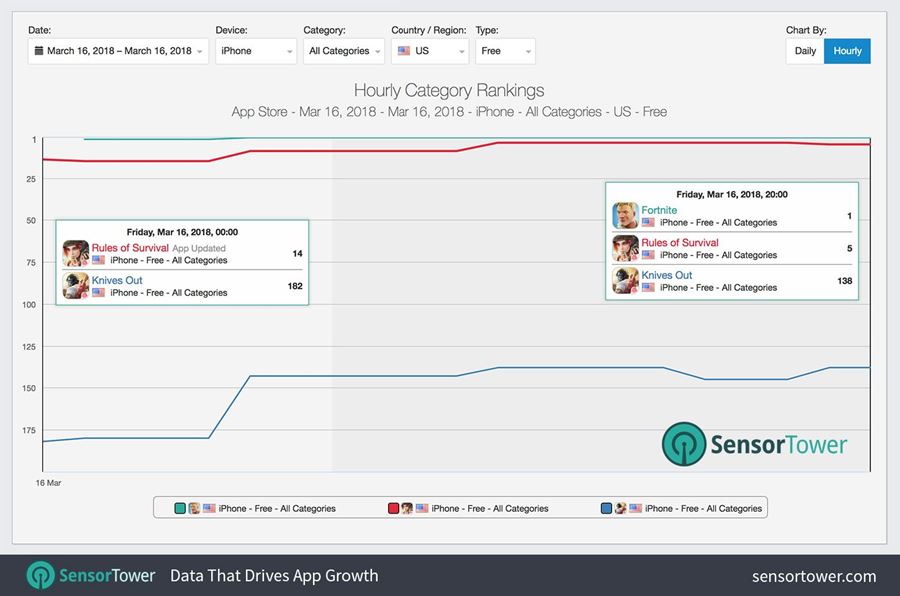 When Fortnite’s soft launch began on iOS (16th), it boosted downloads from other Battle Royale games such as Knives Out and Rules of Survival.

On the same day March 16, Rules of Survival ranged from 14th to 5th most downloaded app and Knives Out ranged from 182nd to 138th. Needless to say, Fortnite came in first in less than 24 hours. According to analyst Daniel Ahmad checked on SensorTower.

In the same period that Fortnite was in soft launch, the game Fortcraft, a very similar title, was one of the most wanted games in Android. The graph of interest in the game is self-explanatory.

The moral of the story. Most players do not have powerful smartphones to run official versions. Because of this, they are looking for lighter alternative games.

For the time being, these “inspired” games are extremely relevant. It may not be two years from now, but by then, developers have already created a giant fan base. It’s the same story that happened to Minecraft clones on Android and iOS.